A blind flange is a solid steel piece with no bore (interior diameter) and primarily designed to cap off a line. As the majority of flange connections allow for the passing through of air or fluid via an interior opening, blinds give the ends of pipe connections a well formed termination point or rerouting of the media in question towards another portion of the pipe assembly. Opt for a blind flange in these cases, as well as in instances when a pipe line requires a future modification such as the installation of a valve or fitting to reroute flow.

The majority of blind flanges are of basic constitution, require minimal machining compared to other flanges, and weigh more than most options given the lack of a bore. Although these are typically provided as blanks to match up to slip on and weld neck flanges, we offer them custom machined as well. Popular alterations include NPT threads in the center, as well as custom bore holes to function as slip on flanges without hubs.

Blind flanges can also be furnished with high hubs on higher pressure applications (most API 6BX blinds have high hubs as a requirement).

The three most popular forms of face connections for blind flanges are typically going to match the mating flange in question. These include raised face, flat face, and ring joint (RTJ) face seals. The first two are more common in basic sealing applications, with RTJ being the face of choice for higher pressure applications.

In specifications from decades past, including B16.1 and other industrial standard cast steel requirements, blind flanges would often contain a slight recess in the center portion of the raised face. This recess allowed for the mating of the end of pipe into the connecting flange and allowing for a seal to form between this connecting flange and the blind. The larger OD blind flanges opted for a concave recess through the body of the blind to create a dished head formation at the top of the flange. As the older cast iron specification is relatively obsolete, most blind flanges will not be made in these styles. Instead, opt for a modern blind flange with or without a hub. 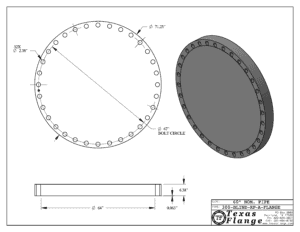