Tropical Storm Barry And How It Affects Oil & Gas 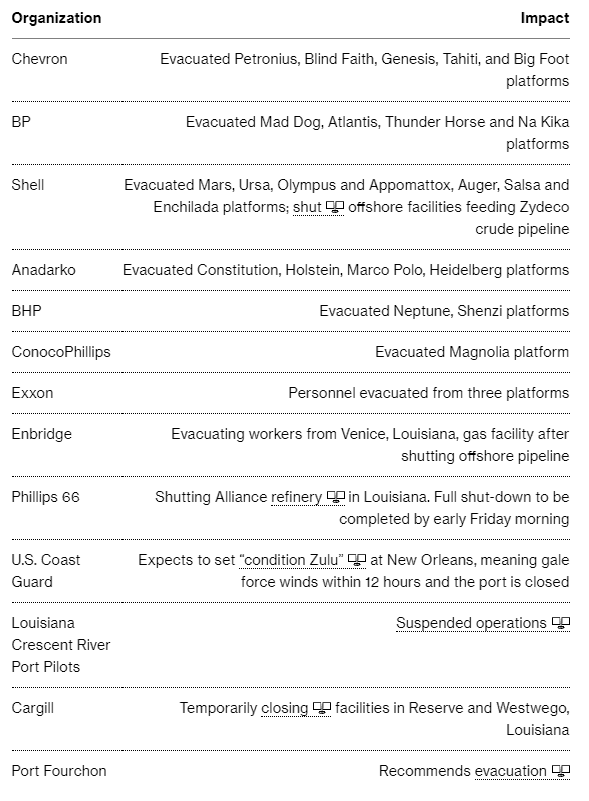 Last Friday, July 12th, we all were very concerned for all our friends out in the Gulf and for all of those in the direct path of “Tropical-Briefly Hurricane-Storm Barry”. While we are still praying for those who received over 15 inches of water, all of those affected by the flooding near the Mississippi River, and all those still underneath Barry, I wanted to take a look at what Barry influenced along his journey and what it means for all of us in the industry. Preliminary figures indicate that Barry had the potential to cause $800-900 million dollars in damage, however be on the lookout for updated numbers as Tropical Storm Barry continues to wane.

In preparation for Barry, offshore operators evacuated rigs, relocated them, or at the very least halted production due to safety concerns over the coming storm. By Wednesday July 10th, 600,000 barrels of production had been halted, and by Friday July 12th, over 1,000,000 barrels per day of Gulf production come to a standstill. Despite being only ~1/12th of the US production capacity, this slowdown contributed to the WTI price spike around July 10th . ol is still trading at the natural disaster premium with a slight retracement back below $60 as of the morning of July 16th. The officially posted figures indicate that ~%53 of oil production and ~%45 of natural gas production were cut in preparation of Barry.

The unfortunate truth is that we have refineries to worry about at home, not just the rigs in the Gulf. Initially, refineries in the storm path intended to stay online, but as Barry bore down numerous refineries decided to go offline to mitigate any potential dangers for the employees and the facilities. While I do not have any hard numbers, the true tell will come in a week or so with any fluctuations up in the price of gasoline at the pumps. Something else to keep an eye out for: if refinery output falls below crude production, we could tip the good ole scale of supply and demand against our favor and cause a drop in crude pricing.

Two major players in LNG (Liquefied Natural Gas), Cheniere Energy’s Sabine Pass terminal, and Sempra Energy’s new Cameron Facilities were both potentially in Tropical Storm Barry’s crosshairs, and currently it appears as though no debilitating damage occurred. It is worth noting that Phillips 66’s refinery in Alliance, Louisiana was shut down Friday July 12th during the mandatory evacuation order in Plaquemines Parish. As of Monday July 15th, the Alliance refinery has started operations again and should be operating at full capacity again shortly.

We are thankful that Barry did not maintain “Hurricane” status upon landfall and therefore did not rain as much as anticipated. Though some scary pictures of NOLA circulated, we are happy to hear the pump system got them dry very quickly. Louisiana officials also state that NO LEVEES were breached by the storm surge. HALLELUJAH!

Don’t forget to check out our other free online resources!